How To Play Flash Games

Equestria Mlp Burger Cooking is a free game for girl to play online at Gamesmylittlepony.com. This game is created and developed by Juegos media. As other games on our website, you can play Equestria Mlp Burger Cooking in your browser for free. In this game, you will learn how to prepare world's best burger with our best friends from Equestria Girls from My Little Pony with the Burger Cooking. Very simple to play this game, you just use your mouse and follow instructions to cook a great burger. In this game, you will meet again Equestria Girls Twilight Sparkle and Rarity. You will help them to prepare the My Little Pony burger cooking for their friends. 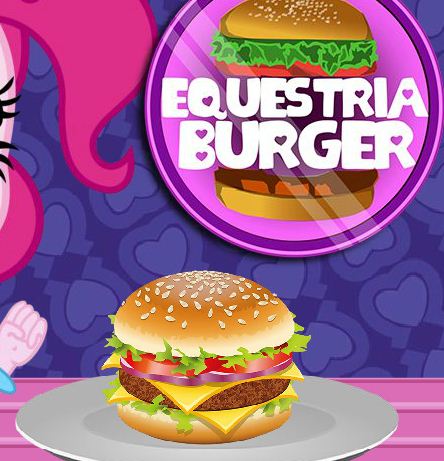 Equestria Girls Rarity appears in the My Little Pony Equestria Girls franchise. She is a student at Canterlot High School and keytarist for the Rainbooms. Ans in My Little Pony Equestria Girls, Rarity first appears after Sunset Shimmer ruins Twilight Sparkle's image at Canterlot High with an online smear video. Rarity pulls Twilight into an empty classroom and gives her a disguise.
Now, you will go to step by step to realize the My Little Pony Burger cooking. In the first game, you must prepare all the ingredients such as egg, flour,..Let's place the ground egg bowl on the table. After that you will let egg in to the bowl. You will add the mined chicken into the bowl. You continue to put pepper and salt into the bowl. You will mix this mixture together. Now, let's place the pan on the stove and switch on the oven. one, you will start to decorate the burger.

You will use your mouse to play and help Equestria girls Twilight Sparkle and Rarity to make the burger cooking. You will go to next step by step to make burger cooking for them. Enjoy this game.

You will use mouse to make the burger cooking with MEG character. Finish each task and next to other pages of game. Please concentrate here and get score. The strategies in this game are active and careful in the course of the game.