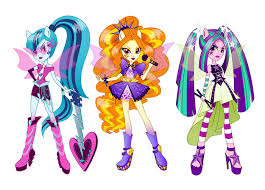 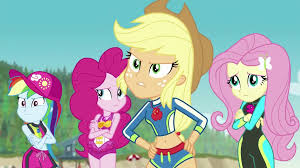 My Little Pony Equestria Girls Apple Jack appears delivering fizzy apple cider to Pinkie Pie, the head of the Fall Formal planning committee. In this context she has the conflict with Twilight Sparkle. Then Apple Jack makes new friends with Twilight Sparkle. They will mêt Rainbow Dash and they become close friends. Finally all help Twilight Sparkle get voted for Princess of the Fall Formal.
My Little Pony Equestria Girls Rarity appears after Sunset Shimmer ruins Twilight Sparkle's image at Canterlot High with an online smear video. Rarity pulls Twilight into an empty classroom and gives her a disguise. In this context, Rarity encourages all the students to wear the Canterlot Wondercolts' pony-eared headbands and tie-on pony tails. In this film, you will meet image Rarity and her friends that can play music as professional artist. Rarity has an important task is to design the suitable outfits for all the member in the band. She is known as a fashion designer.
In My Little Pony Equestria Girls, Rainbow Dash appears as the leader of school's sports teams. Here you can see the determination to win in the match. So, she and her group bring the win for their team.
The last main character that I want to tell is Twilight Sparkle. She appears and is mentioned throughout the My Little Pony Equestria Girls franchise. As her friends, she is a student at Canterlot High School, a former student of Crystal Prep Academy, and the owner of Spike the Dog. Besides it, she is very smart and help her friends solve many problems.