This is one of the main My Little Pony characters in My Little Pony series film. She is a female unicorn pony who transforms into an Alicorn and becomes a princess in Magical Mystery Cure. She has an older sister, Shining Armor, a sister-in-law, Princess Cadance and a niece, Flurry Heart.
She is a smart pony. In the My Little Pony series, she is described as adviser of Princess Celestia and she has an assistant, Spike. In the film, both are going through many difficulties together and in order to be successful they trust each other very much. The story of Twilight Sparkle starts their moving from Canterlot to Golden Oak Library in Ponyville to study the magic of friendship, and in Twilight's Kingdom - Part 2, she gains her own castle—the Castle of Friendship and gains the title "Princess of Friendship". In My Little Pony film, each character represents the different element and Twilight Sparkle represents the element of magic.
Before becoming the Princess, Twilight Sparkle is Princess Celestia's student. She has an important task to send friendship reports to Princess Celestia. She has also a cute pet named Owlowiscious
Twilight Sparkle is an in the important My Little Pony character. From appearance to personality, she always makes an important contribution to the success of the My Little Pony film. 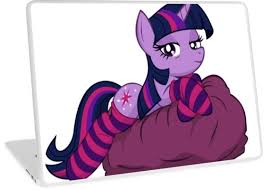 Here is also the main My Little Pony character. She was born and raised on an apple farm, like her name. She lives with her grandmother Granny Smith, her older brother Big McIntosh, her younger sister Apple Bloom, and her dog Winona. In this film, she represents the element of honesty. Her personality should honestly beloved by many people. They also use this image to educate children, helping children to come to the good in life
In My Little Pony film, Apple Jack is describe as a brave, reliable, strong, mature, and hard-working pony, although headstrong about doing things on her own. In this film, she speaks with a Southern American accent, a thick southern drawl, similar to the accent of the southwestern Missouri and Oklahoma Ozarks, where there is a great number of apple orchards. She attaches great importance to her friends and she calls them as "sugarcube" as a sign of affection. She is always straightforward in everything including eating, which sometimes makes her friends uncomfortable. Apple Jack has a simple fashion style and she dislikes things that are "girly" and "fancy", like the froufrou dresses in Suited For Success. She tries always being a pony of elegance. After some time, she moves house but finally, she decided to come back her
Apple farm.
In a Canterlot Wedding - Part 1, Apple Jack crafts a heart-shaped ice sculpture and she enjoys wearing a dress in Simple Ways. In film, she loves much a light brown Stetson hat, she only removes it before sleeping. She is an especial pony because she she is the only one of the six main characters to keep her mane and tail tied back in a "ponytail". She takes great pride in her hat and seldom goes anywhere without it.
In the episode A Canterlot Wedding - Part 2, she hastily puts on her hat over her headband while Rarity is busy crying for Princess Cadance and Shining Armor and In the episode The Mysterious Mare Do Well, Applejack is the only pony to keep the hat on when Rainbow Dash realizes that it was her friends that were the hero stealing her thunder. Also, in the many times that she has been made to wear a dress, she usually has a revised version of her stetson. She also has more than one hat in Magic Duel because Big McIntosh, Apple Bloom, Granny Smith, and Applejack herself are each wearing copies of the hat at the same time. In Somepony to Watch Over Me, the Apple family home has a whole closet with Applejack's hats, along with pink bows for Apple Bloom. Three of Applejack's acquisitions of her hats have been specified: She has a stubborn personality and sometimes inflexible, causing her to be hostile toward others or incapable of seeing alternate solutions to a problem..
Here she is described an empathetic members, she puts often the needs and feelings of others before her own.
You know that Apple Jack represents the element of honesty. In Friendship is Magic, part 2, she demonstrated her honesty when they faced their challenges against Nightmare Moon, so she feel always difficult to go against her natural honesty in Party of One when she has to lie about why she cannot attend Gummy's after-birthday party. In this film, Apple Jack possesses extraordinary athletic abilities. She competed with Rainbow Dash in the Iron Pony competition in Fall Weather Friends, where their athletic feats draw a sizable crowd. Applejack demonstrates her skills with a lasso in Applebuck Season, Boast Busters, Look Before You Sleep, Bridle Gossip, Fall Weather Friends, and The Return of Harmony Part 2. 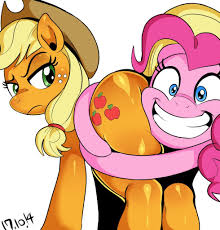 The 3rd character that I want to tell Fluttershy. She is a female Pegasus pony and one of the main characters of My Little Pony Friendship is Magic. In this film, she lives in a small cottage near the Everfree Forest and takes care of animals, the most prominent of her charges being Angel the bunny. Here, she represents the element of kindness.
Fluttershy is described as a nice pony and good personality. So, she is loved much by children and everyone. Thank Lauren Faust, producer-created many childhood toys G1 Earth pony Posey with Fluttershy image. The episodes The Cutie Mark Chronicles and Hurricane Fluttershy offer glimpses into Fluttershy's past. Fluttershy come from Cloudsdale as Rainbow Dash. Like a filly, she was a weak flier and was harassed by the same Pegasi who were jeering at Rainbow Dash in Sonic Rainboom, and they nicknamed her "Klutzershy. Fluttershy is really afraid of dragons, so she is also afraid of Spike. But then she like also Spike and she explains the exception of Spike on account of him not being grown-up
As her name, she has a shy personality. Her personality is a bit shy and timid but she is very enthusiastic in everything. In Friendship Is Magic, her shy nature contrasts with Rainbow Dash's abrasiveness, most notably in Dragonshy, and to a lesser extent in Sonic Rainboom. In season one, Fluttershy's inability to speak up often annoys Rainbow Dash, and Rainbow expresses her aggravation more than once. One instance is when Fluttershy cheers as loudly as she can for Rainbow Dash at the beginning of Sonic Rainboom, yet much to the latter's exasperation, can't manage more than a whisper. Season two shows them having grown closer to each other as friends despite their differences.
In Dragon Quest, She continues to displays her fear of dragons. Fluttershy pointedly refuses to watch the Dragon Migration with her friends, despite Twilight's coaxing. It culminates in Fluttershy pushing past Rainbow Dash and jumping out the window, fleeing the scene before any of them could follow her.
In Castle Mane-ia, she displays fear at the possibility of running into star spiders. In the episode Maud Pie, she tells Maud about spiders that live in Ponyville, saying that "even though they may look a teeny bit scary, they're actually very sweet and help keep other, more dangerous insects away!" Although somewhat shy, Fluttershy is a strong pony. In The Return of Harmony Part 1, she is the only pony who isn't easily affected by Discord's manipulation, prompting him to forcefully hypnotize her into her polar opposite (in her case, cruelty)
If you follow Friendship Is Magic, to season six, Fluttershy has developed a somewhat witty, playful side to her assertiveness. In Flutter Brutter, she demonstrates constant, often snarky assertiveness toward her slacker younger brother Zephyr Breeze. In Dungeons and Discords, she cheekily encourages Discord to spend time with Spike and Big McIntosh. In Viva Las Pegasus, she teasingly urges Applejack to put aside her grudge with Flim and Flam to solve their friendship. In Fluttershy Leans In, Fluttershy becomes more assertive when her vision for her animal sanctuary is not met.
Fluttershy's personality also has positives like that she can endure with others. She can withstand almost anything that will make other ponies explode in anger. In this film, she takes the role of Saddle Rager, who is part of a group of superheroes called the Power Ponies.
In It Ain't Easy Being Breezies, she becomes angry at the bees for trying to hurt Seabreeze after her attempts at kindness don't work on them. So, each episode, Fluttershy is described with the different personality but overall her personality is somewhat shy and enduring. 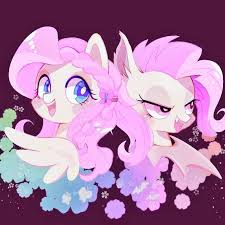 Rarity is a female unicorn pony and one of the main characters of My Little Pony Friendship is Magic. She is Sweetie Belle's older sister and the subject of Spike's long-term crush. She loves much fashion style and she is a fashion designer. She has a shop in Ponyville, the Carousel Boutique. She raised a white cat, Opalescence. In this film, she represents the element of generosity. In Friendship Is Magic, Rarity is the main fashion designer who creates the outfits for all My Little Pony character in film. She helps them to become more beautiful thank to her design. She like much her mision as well. It seems that she always finds joy at work. The appearance of a prisoner is how Rarity always shows her as a perfect Pony. 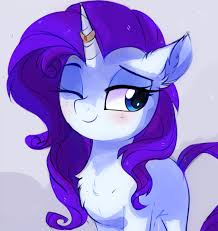 Pinkie Pie has full name Pinkamena Diane Pie. She is a female Earth pony and one of the main characters of My Little Pony Friendship is Magic. She like making a cake and she is an energetic and sociable baker at Sugarcube Corner. She has a cute pet alligator Gummy. She can sing well and she writes many songs as well. Because she represents the element of laughter. So, she is always the source of many of the show's comical and cartoonish gags. In some merchandise, she is called Ponka Po. She has a nice apprerance with the main pink color.
In the Frienship Is Magic, she "used to have a 'power' of sorts when she ate too much candy", which she called a "Sugar Rush". In the film, Pinkie's mane and tail is mentioned many times. They are "poofing up" when she's happy and going flat when she's sad was conceived by Jim Miller for The Cutie Mark Chronicles. 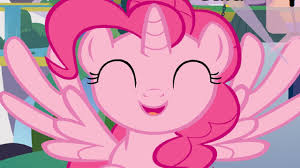 Rainbow Dash is a female Pegasus pony and one of the main characters in My Little Pony Friendship is Magic. As her name, she has a main task in film is to control the phenomenon of weather at Ponyville. In the In Sonic Rainboom episodes, Rarity and Princess Celestia both declare that she is the best flier in all of Equestria. Rainbow Dash has a cute pet tortoise named Tank. In this film, she represents the element of loyalty. She has a very special appearance as a color rainbow phenomenon as red, yellow, blue, orange, green, purple,...As you know, a rainbow is a meteorological phenomenon that is caused by reflection, refraction and dispersion of light in water droplets resulting in a spectrum of light appearing in the sky. It takes the form of a multicoloured circular arc. Rainbows caused by sunlight always appear in the section of sky directly opposite the sun. When mention Rainbow Dash, we think this weather phenomenon.
Here you will enjoy articles about My Little Pony, Horse, Unicorn or everything related to My Little Pony such as My Little Pony Pictures, My Little Pony Games, My Little Pony Coloring, My Little Pony Names,.. All are free here and we update them daily. You can enjoy other games such as Elsa games, Sailor Moon games, Descendants games, Io games, Baby Games,... 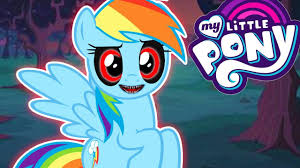