My Little Pony Through The Episode 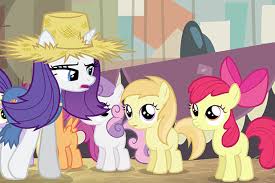 My Little Pony: Friendship Is Magic (season 2)
Friendship is magic developed by Lauren Faust, originally aired on The Hub in the United States. In this season, Princess Celestia summons Twilight Sparkle and her friends to use the Elements of Harmony in order to recapture. Unfortunately, they find the Elements missing and Discord teases them with a riddle. Believing the Elements to be at the center of the Canterlot garden hedge maze, Twilight leads her friends there but Discord manipulates them by separating them in the maze and brainwashing all but Twilight into polar opposites of their usual selves, with Rainbow Dash flying away in the belief that Cloudsdale is in trouble. Feeling triumphant, Discord thinks he has bested Twilight and continues to spread chaos across all of Equestria.
My Little Pony: Friendship Is Magic (season 3)
The content of season 3 is to tell about Princess Celestia learns and the reappearance of the Crystal Empire. As you know, King Sombra is very sinister, so Princess Celestia fears Sombra will return and use the power of the empire to take over Equestria. So, she gathered all ponies and conduct meetings to find ways to cope.She summons Twilight Sparkle and directs her to join her friends, Princess Cadance, and Shining Armor at the empire to help protect it as a test of her abilities. At the empire, Cadance attempts to maintain a spell to prevent the shadowy form of King Sombra from entering. Twilight and her friends talk with the residents of the empire, and learn of a Crystal Fair which used to enlighten the hearts of the empire and protect it from the king. Only too late does Twilight realize that the missing Crystal Heart is the centerpiece of the fair and a necessary artifact to protect the city.

In this season, there are new My Little Pony characters such as Starlight Glimmer, Trixie, Thorax, and Discord. They are awarded medals of honor for defeating Queen Chrysalis and bringing harmony to the Changeling Kingdom. During the celebration reception, Twilight Sparkle realizes she has nothing left to teach Starlight because of her accomplishment, so she turns to Princess Celestia, her own former mentor, for advice.
My Little Pony: Friendship Is Magic (season 8)
Now, Twilight Sparkle and her friends return home to discover that the Cutie Map has expanded to cover lands beyond Equestria. Then Twilight Sparkle open the school and she can teach about friendship with other ponies. She has more students such as Gallus, a sarcastic griffon; Yona, a clumsy yak; Smolder, a cocky dragon; Ocellus, a timid changeling; and Silverstream, an excitable hippogriff. The students love so much this school but then they fell boring and the school must closed. My Little Pony: Friendship Is Magic (season 9)
At this year, 2018 Hasbros announced season 9 with 26 episodes as well.